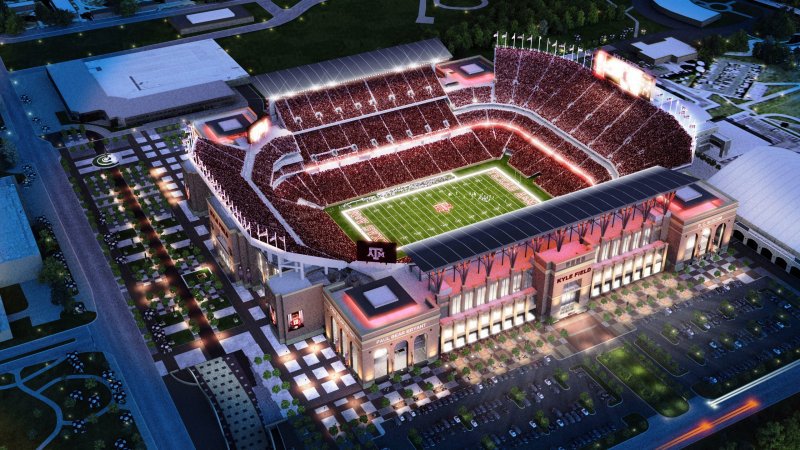 Since 1904 Kyle Field has served as home to the Texas A&M Aggie football team in rudimentary form and as a complete stadium since 1927 , “Home of the 12th man”.

Kyle Field, located at Texas A&M University in College Station, Texas has once again expanded to become the 13th largest collegiate football stadium in the nation.  Now seating over 90,000 screaming fans, Kyle Field and its new amenities represents the finest in the football experience. Of those new amenities, a full menu of fire protection systems and components have been provided by AFPG out of College Station, Texas. AFPG has been involved in all of the fire protection upgrades to the stadium since 1993, including two major renovations starting with the premier “THE ZONE”. “The Zone” addition closed in the south end zone for additional three tier stadium seating, retail area, entertainment and private box areas and the AGGIE museum. The new fire protection systems for this addition included a fire pump, class 1 standpipes as well as wet & dry pipe sprinkler systems.

More recently, AFPG installed a multimillion dollar project consisting of multiple wet pipe systems, dry pipe systems, pre-action systems, fire pumps, and wet and dry standpipe systems.  We were successful in completing the first phase of this project on time before the first home football game of the 2014 season.  The first phase included retrofitting the existing East side and the addition of the new south side.  The west side of the stadium is scheduled to be demolished in December of 2014 and includes a complete rebuild before the first home game of the 2015 season. Project value: $3,074,551

AFPG continues to be the preferred fire sprinkler vendor for the FIGHTING TEXAS AGGIES.